Background video and image ©Blizzard
This article is a ‘How to’ and Tips in playing Holy Priest DPS spec for World of Warcraft: Legion 7.3.5 patch.
Last update: 22nd April 2018 || Version 3.1.0

Due to modifications to the Priest class since the last expansion Warlords of Draenor, Holy Priest DPS is no longer a viable DPS spec, especially within a raiding environment. The Discipline and Shadow spells and abilities have been removed for the Holy specification, making the DPS output significantly lower than in previous expansions.

This guide is for players who want to know how to quest/leveling as a Holy Priest DPS in World of Warcraft: Legion expansion between levels 100 and 110. When you begin questing in the Broken Isles (the levelling area in the Legion expansion), the initial DPS output will be extremely low when compared to other DPS classes within the game. The DPS output maybe low, but the HPS is very high, giving the priest class the ability to keep themselves alive when they are attacking or being attacked by most NPCs, albeit, it might take a while to defeat them.

The Holy Priest DPS only has four primary statistics to build on:

Intellect translates directly into damage. The more intellect your Priest has, the more damage (and more healing if you are playing as an off-healer) they will achieve: you can’t have enough of it. More is better. Gain as much Intellect as quickly as possible in early game by taking any gear that has a higher Intellect value.

Critical Strike rating is the probable chance of scoring double damage on a target.

Haste is for reducing the cast time of your spells. Try and collect enough haste rating so when you cast Smite (your main DPS spell), it’s around the 1.2 seconds mark.

Versatility provides a percentage increase to your damage and healing spells, while also reducing the damage taken for a percentage amount.

Mastery only affects your healing spells (Mastery: Echo of Light). Mastery is a dead secondary stat as this is for healing only. Concentrate on getting gear that has Critical Strike and Haste as secondary stats.

With regards to Trinkets, always take trinkets that have Intellect as the primary stat regardless of the secondary stat or ability.

There are no talents available which give your priest a direct DPS increase. None. There are however four talents which can help with the DPS rotation:

Level 30: Perseverance – When you cast a Renew upon yourself, it reduces damage taken by 10%. Can be useful when stacking with Focused Will, give you a 40% total damage reduction.

Level 45:Censure – Holy Word: Chastise stuns the target for five seconds. Can be very useful when fighting higher level/higher health targets or PvP as this stops them from attacking you. Be warned, doesn’t work on every NPC target.

Level 90:Divine Star – Launches an energy bolt directly in front of your Priest causing healing to friendly targets and damage to enemies. After 30 yards, the energy bolt returns to you, healing allies and damaging enemies on its return path. This talent can be very useful, especially when fighting multiple enemies, but the problem is, all the enemies must be in front of you, rather than surrounding you. To achieve this, simply walk backwards (if you can) before launching Divine Star. Unfortunately, this talent has a 15 second cooldown. Because of the long cooldown, the DPS is minimal at best.

Level 100:Apotheosis – When activated, Apotheosis reduces the cooldown of your Holy Word spells when you cast the corresponding spell. In other words, you can cast Holy Word: Chastise again after you’ve cast Smite two or three times instead of six or seven; depending on your Haste rating. Very useful when you are attacking a Rare Elite, World Boss or another PvP player. 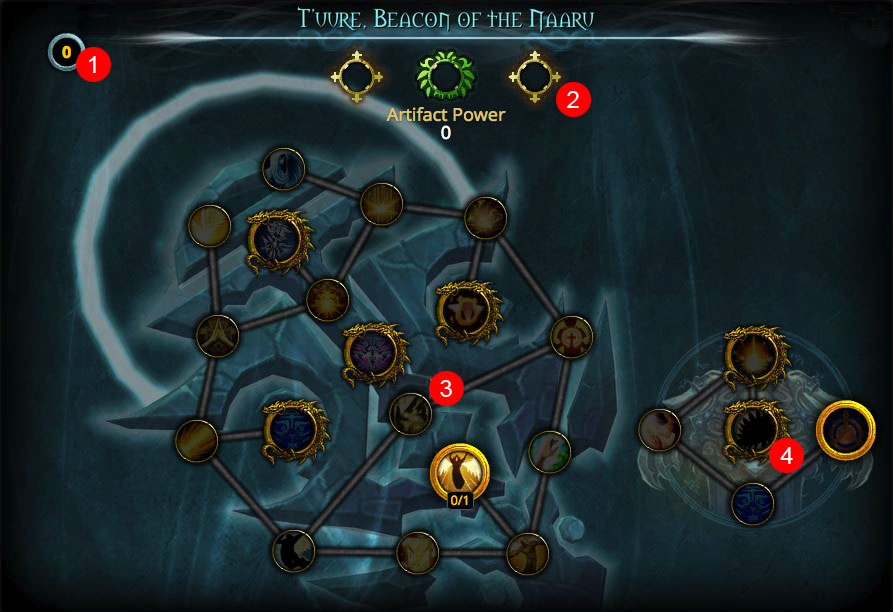 Relics (2) are acquired from quests, world quests, dungeons and raids.

Spending AP on your artifact weapon obtains traits (3). Each trait gives your Priest additional spells or abilities or upgrades an existing spell or ability. There is only two traits that gives a DPS increase: Light of the Conclave and Concordance of the Legionfall (4), unfortunately you will need 35 and 50 traits respectively to obtain this. The only useful trait is Focus in the Light which slows down the target by 30% if you cast Holy Fire or Holy Word: Chastise only when the Focused Will buff is active; the quickest way to obtain this trait is 8 traits.

Each trait you obtain increases the weapon’s total rank (1). Each rank obtained increases damage dealt by 1%. The weapon has a soft cap of rank 75, so obtain this rank can increase your damage dealt by 75%. Obtaining AP to get to rank 75 is a time-consuming process as the AP required to get to the next rank goes up exponentially.

To obtain the AP necessary, you need to research Artifact Research notes from Juvess the Duskwhisperer in your Class Hall, but this process can only begin when you reach Level 110. Each Artifact Research note costs 500 Order Resources to research and each note increases your Artifact Knowledge which in turn boosts your AP percentage gain. Artifact Knowledge is capped at level 25 and it can take some time to complete.

A new feature of the Legion expansion is Class Halls. These are exclusive areas within the game where only your class can enter and it is here whereby you upgrade and modify your artifact weapon, research Artifact Knowledge, research class hall upgrades, recruit champions (called Followers in game), send champions on quests, obtain quests from your Class Hall leaders and various other tasks. Think of Class Halls like Garrisons from Warlords of Draenor, but instead of being exclusive to you, it is shared with other players of your class.

Upon doing the Class Hall quest chain, you will eventually complete quests where you will recruit champions, similar to Warloads of Draenor. Some of these champions can be assigned to you as a bodyguard, which can help you with quests and world quests on the Broken Isles. Two champions are worth assigning as your champion as a DPS increase: Zabra Hexx or Sol. Pick either one depending on your playing style, but you will obtain Zabra Hexx first.

Once you have recruited these champions, level them up to 850 as fast as you can. The higher their level, the higher their DPS. You level the champions by collecting Champion Armaments, which are obtained from Class Hall missions or from Lilith, your Armament Supplier, whom becomes available after you’ve research Tier 3 of the Class Hall research.

Multiple targets:
If you are being attacked by two or more NPCs, different strategies are needed depending on your Level, Gear Level score and Artifact Weapon trait level.

If you are of low level, the best strategy is to concentrate your attack on one NPC at a time. Only advisable to take on a maximum of three same level NPCs.

If you are of high level, the best strategy is to cast your instant damage spells on one target and instead of using Smite, use Holy Nova and Divine Star instead. Can attack multiple NPCs at once.

Experience will teach you what and how many NPCs you can attack at any one time.

Pots
Potion of Prolonged Power – increases all stats by 2500 for one minute, one minute cooldown.