‘The Warlock of Firetop Mountain’ was the first book in the Fighting Fantasy series to be published by Puffin Books in 1982 with a very limited print run. Puffin Books originally thought the book wouldn’t be successful, but the authors of the book, Steve Jackson and Ian Livingstone proved them wrong and The Warlock of Firetop Mountain went on to be a massive success, was reprinted 20 times in a year, and the rest is history as they say. Between 1982 and 1995, a total of 59 books were published, with various spin-offs like the Sorcery! series and Fighting Fantasy novels. In recent times, some of these books have been reprinted by other publishing houses and some fan favourites have even been released as smartphone Apps and games on Steam!

My first memory of playing a Fighting Fantasy book was back in 1983 with ‘The Forest of Doom’ (number 3 in the original series, or FF3 for short). On my first attempt at the adventure, I didn’t get far into the story as I decided to attack the wizard called Yaztromo, which was a huge mistake. Yaztromo was the main quest giver of the adventure and he was there to help me, so let’s just say my quest and adventure ended before it had even begun. D’oh!

From that moment on, I was hooked. I loved the fact that I could control the story, I could immerse myself into these fantasy worlds where I can go on an adventure, interact with various characters, go on quests, sub-quests, solve puzzles, make decisions and attack monsters etc. You have to remember, this was the era before the Internet, where game consoles and computer games were primitive by design, so these books were a perfect form of escapism for its time.

Fighting Fantasy was extremely popular amongst young boys in the 1980s. It was so popular, my friends and I would borrow each others books’ and it wasn’t particularly hard to find a friend that had a particular book you were after. We also use to play Fighting Fantasy in the playground/schoolyard as it was that popular (I always played a wizard). One particular title I enjoyed reading was FF8, ‘Scorpion Swarm’. All the adventures so far, FF1 – FF7, had a somewhat linear storyline whereby you couldn’t go back the way you came, but in Scorpion Swamp, you could! It was a fully free-roaming experience! It did get confusing on where you were going and where you had been, so in the end, I made a map! I also like the fact there are three separate quests in this adventure but you could only do one quest at a time, which meant you had to read the book three times to 100% complete the book. The book had it all, magic, adventure, suspense, collecting treasure and artefacts and fighting monsters, great stuff. Everything a kid could ever want.

When I first started playing, I played the books properly by rolling dice for my abilities, on fights and testing my luck etc., but eventually, I stopped playing this way, instead, I put myself into ‘God’ mode. I stopped playing the books correctly because I was more interested in the story of the adventure and if I were to die because of combat or bad luck, why restart the whole book again for only to take the same decision path as before?

But the authors of the books got more clever and creative as the series went on, with more and more difficult puzzles to complete such as decrypting gobbledygook to find out which paragraph number to turn to or you had to find a particular character in the book who gave you that one piece of critical information or object that you needed such as a paragraph number.

Although I have all of the Fighting Fantasy books, I have to admit, I haven’t read them all yet! Still, from the books I have read, my favourite is FF10 ‘House of Hell’. Set in modern-day times (that’s 1980s modern times), the story is about you driving along a lonely country road in a thunderstorm, your car breaks down, but you see a house in the distance and you decide to approach the house to see if they can offer assistance. Sounds familiar doesn’t it? The adventure ends up being the classic escape from the haunted house but the book is considered by many fans to be one of the hardest books to complete as death is more or less around every corner. I have never completed House of Hell, even to this day; I’ll probably never will.

Because I grew up in a low-income family, I was unable to collect all of the Fighting Fantasy books at the time and when I moved out to go to University, the collection that I did have, was lost to the sands of time; I think my Mother gave them to a charity shop (I hope she did!). By then (1995), I think I had about 30 books in the collection, tragic.

So, fast forward to around 2003, with the explosion of the online auction website eBay and a full-time job wage package in my back pocket, I decided to recollect the original Fighting Fantasy book series, all 59 books (I thought it would be the perfect way to increase my eBay rating as well). The collection took me the best part of three years to collect and at some considerable cost (explained later).

Due to its overall success, the early Fighting Fantasy books were reprinted many many times over its lifespan and the cover design was also changed. I didn’t want my collection to have a mosaic mismatch of cover designs, so I decided I wanted to have my collection to have the same front cover design so it looked consistent when laid out on the floor (it’s my OCD). The last few books in the series only had a single print run and these books had a dragon above the authors’ names, so I decided on this specific design (I didn’t have much choice really). This design is known as the Dragon Cover Format. Unfortunately at the time of collecting, I didn’t realise there were two types of Dragon Cover Format: Bronze and Black. The difference isn’t the dragon picture itself, as I initially thought, but it’s how the way the authors’ names are printed. If the authors’ names are printed in a gold metallic foil, then the cover is referred to as Golden/Bronze Dragon, whereas if the authors’ names are in black ink (no metallic foil), then the cover is referred to as Black Dragon No Bronze-Foil. 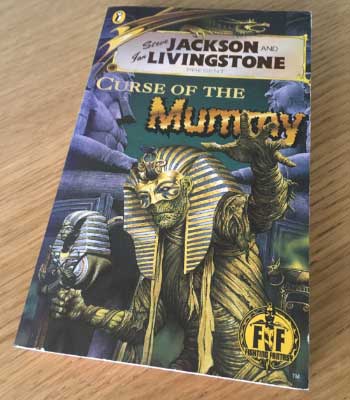 Books FF51, ‘Island of the Undead’, to FF59, ‘Curse of the Mummy‘, were very difficult to obtain due to their rarity because of their limited print run. Also, as Fighting Fantasy books were becoming collectable at the time, this made them more expensive.

The prices I paid for the books, FF1 – FF59, ranged from 50 pence to £48; sometimes, the postage and packaging cost more than the book itself! The two most difficult books to collect, which were also the most expensive, were FF58, ‘Revenge of the Vampire’ and FF59, ‘Curse of the Mummy’. They didn’t appear for auction that often, especially in very good condition or better and when they did, they went for stupid money. Considering the books were released for a price of £3.99, ‘Revenge of the Vampire’ cost me £48 and ‘Curse of the Mummy’ cost me £36 (if memory serves).

The condition of the book itself was extremely important to me. This was a collection after all, so the book had to be in Mint to Very Good condition, if possible. This meant the book had to have: a tight binding creaseless spine, minimal creasing of the cover and pages, no pencil/pen marks of any kind, a clean unwritten adventure sheet and if applicable, have the map printed on the inside cover.

Of course, my definition/expectation of ‘very good condition’ differed massively from other eBay sellers and there were a few times whereby I received a ‘very good condition’ book for only it to go to the charity shop because it clearly wasn’t. You may be thinking, ‘why didn’t you check the photos of the auction?’. I did! But in 2003, when digital photography was at best two megapixels, it was hard to determine the condition of the book. Sometimes I got lucky, sometimes I didn’t. I did get lucky on the last nine as the majority are in very good condition, but sadly, I got unlucky on FF58, ‘Revenge of the Vampire’; it’s in a state where I would class it as good condition, but due to its rarity and price, I doubt I’ll ever get a near mint copy.

Below is a table of my collection, which edition I have and the condition the book is in. I have been very strict in assessing each book’s condition so I don’t appear to be biased. Due to the sands of time and there being no actual records, I can’t remember what I paid for each individual book, but books FF1 – FF49 cost in the range of £0.50 to £5 whereas books FF50 to FF59 cost in the range of £10 to £48.

(if viewing this table on a mobile, you can scroll left and right)

Although the Fighting Fantasy franchise isn’t as popular as it once was, I still immerse myself in a fantasy world but of the virtual kind. I play a computer game whereby you can play a warrior, wizard, priest and other variety of roles, questing, making items, collecting treasure, and battling beasts and demons in an online game called World of Warcraft. I’m currently playing as a Priest or Mage whereby I heal other players in the game or do serious damage to non-player characters. World of Warcraft is heavily influenced by the Fighting Fantasy series. With 9 million active players worldwide, I wonder how many of them grew up playing the Fighting Fantasy books? I suspect quite a few.

Availability:  Get in touch so we can discuss your requirements. I’m currently taking on new projects for 2023 and beyond!