“A Shot in the Dark”

‘Group 39’ are the infamous group of four computing student misfits that attended the BA Interactive Media degree course at the University of Sunderland from 1996 – 2000. The group, with their own unique set of special skills, put to shame the other students of the course, and sometimes, if not always, the whole of the School of Computing of that year as well. So what’s the story?

In 1997, four students came together to do a presentation project for the Software Engineering module (COM 263) on the topic of the ‘Millennium Bug’. They were Graham Mitchell, Jamie Dearnley, Andrew Smyth, and myself. The project was of such a high standard that we, students of Interactive Media (50% computing, 50% graphic design) came top. That’s right. We, multimedia designers, beat the pure computing students at their own game. But how? Was it the content? Doubtful because each presentation had more or less had the same content as everybody else. No, we delivered our presentation with style!

Our presentation was so good, we were asked by our module leader to redo the presentation in the main lecture theatre in front of all the computing students of that year. We sadly declined, but deep down I regret that we didn’t do it. From that day, we four worked together on other projects for the rest of the course, and as we were in group 39 on the presentation list, the name (or brand) stuck.

A Shot in the Dark was the assignment for a module in the second year of the Interactive Media course; COM 267 I think, I may be wrong. Anyway, the assignment was to produce a multimedia application that incorporated QuickTime video elements.

I don’t know who came up with the original idea or concept because the other lads approached me with the idea whilst I was having lunch, but from that hour’s discussion at the dinner table, we fleshed out the main ideas for the project. We would design an interactive murder “who done it” computer game. The idea was simple. The user would watch and listen to various clues on who may or may not of committed the murder of John Doe (our victim within the game).

For any story, we needed a script, that task was left up to me. From the ideas that were fleshed around, I began writing a script and creating primitive storyboards. I think that the task was left to me because I watched a lot more films than the other lads. Also, Graham found this perfect video clip murder scene from the film The Maltese Falcon which we could use to our advantage. Once the script was complete, we would discuss what was good and what was bad with the plot, but the main story theme was there. As there were four of us, we decided that we would be the main four characters and we would all be the suspects in the game.

When I wrote the plot, I basically took ideas and characters’ names from other films, I simply didn’t have the time to write an original screenplay! Once done, we all sat down together and watched the films where I took the ideas. This gave the guys an understanding of what sort of character they were meant to be playing. The main four films that we plagiarised were:

Time was tight on this project, 12 weeks from start to finish, so we couldn’t spend too much time working on the script. It was decided that the main plot, the theme of the story, and key points were there and the script would be finalised more or less on the day of the actual filming of a particular scene. Once the main plot and theme were decided, we had to discuss the technical specifications of the game. We had to present this project to a judging panel for marking, as well as actually submitting the project to the judges, so it was decided that we would do the project to fit on a standard CD-ROM. This gave us a lot of freedom because we could have our video slightly bigger in size than normal (you can fit a lot of floppy disks on a CD).

We had various discussions on the technical format of the video, and as I was a bit more of an expert in this field than the other guys, I suggested the main format for the video. I suggested that we shot the video in widescreen (16:9) because the look was more professional than 4:3, we were shooting a film, not TV right? Because the video was going to be shot in colour, I also suggested that we convert the video to grayscale because i) this would reduce the file size of the final file dramatically, and ii) I think the real reason was that the scenes would look similar in style of The Maltese Falcon. The Maltese Falcon was shot in black and white, so we had to be consistent. This worked for us on so many levels. One, it reduced the file size by a factor of 3, two, because the screenplay was set in the 1930 era, the black and white film was the norm, and three, because we were students, we couldn’t afford proper costumes for the era. For the costumes, we only had to find clothing that was similar in style to the 1930s whereas colour was irrelevant. This also help us with the “blue-screen” chromo effects that we were about to do as well.

Halfway through the schedule, we decided that we would include an action sequence. I think that we added it because we were bored and also it would add some excitement to the content of the game. We had so much fun doing this sequence, it was “…a laugh a minute”.

Once the first few scenes were shot, we got busy capturing the content into the computer. James, Andrew, and I were very lucky to have the talents of Graham. Graham is a Jedi Master at illustration and whilst we were home asleep one night, Graham was busy drawing, stylising the main interface for our game. We were also lucky because Graham had his own DV video camera, which we used a lot instead of the cameras supplied by the University. Unfortunately, the cameras at Uni were in short supply and you couldn’t have them for more than a few days at a time.

We decided, for consistency, that we would use Graham’s camera full-time. Graham also had a new Mac 8600 that had a video capture card, so again, we did not have to use the Uni equipment. Back then, the Uni was very under-equipped I am sorry to say. I too had recently just bought a Mac Performa and I splashed out another £100 for a video capture card, so we had two. Although my machine was not fast enough to capture the type of content that we wanted, it was good enough to get snippets of sounds, frames of video etc.

Once we got the shots into the computer, we had the task of editing, ‘blue screening’, and compressing. This took hours! We also had to do all the graphics, and the last-minute video shots of ideas that we came up with to get the project done.

This project went to the wire, and I do mean *the wire*. All of us didn’t get much sleep in the last week of the project and we all walked into the lecture theatre half-dead and with beards; the CD itself was still warm from the burner. In the end, we were pulling 20-hour days and Graham’s home studio had 4 Macs in it, all doing graphic work in one form or another. Graham and Andrew were busy making sure that the Director lingo was working correctly, Jamie was busy cleaning up the special effects, and I was busy doing the packaging.

After the presentation, we got our grades. We got top marks, 16/16. The module leader claimed he couldn’t give it anything less. We also showed the other students of the course what we were made of. As we were the first students to do this module, the finished project was shown to the subsequent years, our project set the standard.

Due to the size of the whole project, I am unable to put it on the web. Also, the Director projector is MacOS Classic only. 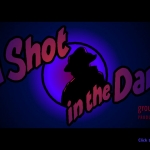 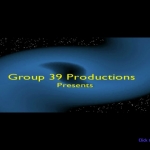 Main intro credit sequence which was inspired by the film 'Event Horizon'. 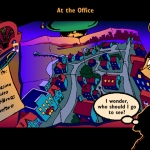 Main interface to the game which was inspired by 1930's deco. 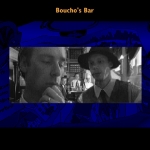 The scene shown at Boucho's Bar.

The scene shown at Dave's House.

The scene shown at Hickey's House.

Main action sequence which was inspired by the film 'Hard Boiled'.

The selection screen where you choose who done it.

This is what happens when you select the wrong person on the 'Who Dun It?' screen.

This project was completed between March – May 1998.